Progress on US 67 Expansion Project in Cedar Hill

Progress has begun on the US 67 Expansion Project in Cedar Hill, Texas.  The project will add capacity to the highway, as well as rebuild the ramps within the project limits.  The project stretches from Beltline Road to Wheatland Road and runs through three cities:  Cedar Hill, Duncanville, and Dallas. 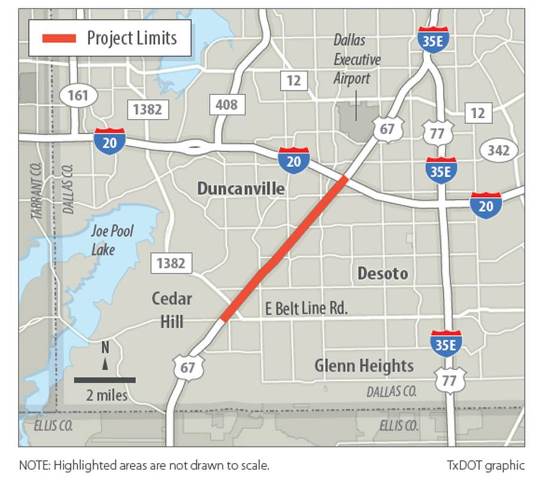 Ashton Strong, the TxDOT project manager, said, “Improvements will increase capacity, improve access to businesses along Hwy. 67 and reduce congestion, especially at major intersections.  The main roadway will expand from two lanes in each direction to three lanes, both ways.  Additional turn lanes will be added to access roads at selected intersections.  At Belt Line and FM 1382 crossings, Texas U-Turns will be added.  Texas U-Turns allow vehicles to make a U-Turn before entering the intersection. This reduces traffic volume and congestion through the intersection.  Further consideration may include access for pedestrians and cyclists to cross the highway bridges.”

Construction began on September 25.  Motorists can expect daytime and nighttime lane closures to take place during the project.  Near the end of the project there will be on-ramps and off-ramps closed for more than a month at a time while they are being rebuilt.  The new lane and ramps could expect to be open in the fall of 2019.